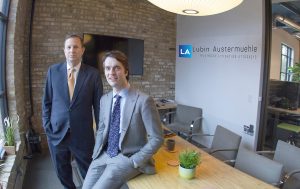 AbbVie, a pharmaceutical company headquartered in Illinois, was sued by a trading firm after it conducted a Dutch auction to determine the price for its tender offer to repurchase shares of its own stock. Shareholders participated in the auction, offering to sell their stock back to AbbVie, and the lowest offered prices were selected by AbbVie until AbbVie had reached $7.5 billion worth of repurchases. AbbVie hired a company to receive bids and determine the final price it would purchase shares at. That company published preliminary numbers and later corrected them after the market had closed. The trading firm alleged that by publishing the preliminary numbers and correcting them after the close of trading, AbbVie had violated the Securities Exchange Act. The 7th U.S. Circuit Court of Appeals ruled in favor of AbbVie, affirming the decision of the district court and finding no violation.

AbbVie, Inc. made a tender offer to repurchase as much as $7.5 billion of its outstanding shares. AbbVie conducted a Dutch auction to determine the price. AbbVie began the auction by setting the price at $114. Shareholders participated by offering to sell their shares at or below $114. AbbVie then selected the lowest price that would allow it to purchase $7.5 billion of shares from the tendering shareholders.

The auction took place from May 1, 2018, to May 29, 2018. On May 30, AbbVie announced that it would purchase 71.4 million shares for $105 per share. AbbVie’s stock, which had been trading at $100 closed at $103 on May 30. Approximately an hour after the close, AbbVie announced that it had received corrected numbers from the company it hired to receive bids, Computershare Trust Co. Instead of purchasing 71.4 million shares at $105 a share, AbbVie would purchase 72.8 million shares at $103 a share. The next day, AbbVie’s share price fell to $99.

Walleye Trading LLC filed suit, contending that AbbVie’s announcement of preliminary numbers, followed by corrected numbers after trading closed, violated § 10(b) and 14(e) of the Securities Exchange Act of 1934. Walley also argued that William Chase, a controlling manager of AbbVie, was liable under § 20(a) of the act. The district court dismissed Walleye’s complaint for failing to state a claim, and Walleye appealed. END_OF_DOCUMENT_TOKEN_TO_BE_REPLACED